He may seem like a nice guy, but he's a tough DM. 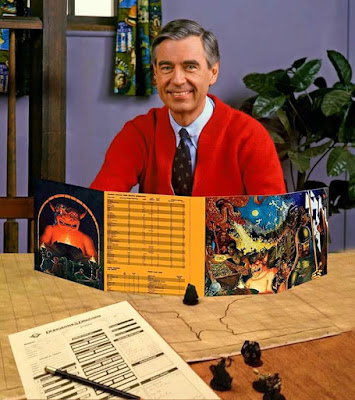 Illustrator and map creator extraordinaire Andrew Degraff has created these compelling Movie Maps detailing out their plots in a visual fashion. The Star Wars and Alien maps are out of this world. Check out this one for Lord of the Rings. When I first saw them I thought they were created digitally, but he has some step-by-steps that show how he paints them in gouache. The map for Goonies looks like a classic dungeon crawl! These are inspiring works of art if you love maps like I do. Go take a look:
http://www.andrewdegraff.com/moviemaps/ 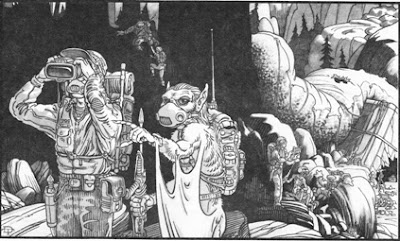 Writing and design are complete. Layout has just been finalized. Now I am working on filling all the spaces in layout with art. Guardians is very near publication.

In order to create a compelling super hero world there needs to be lots of heroes and villains for the gamemaster to work with. Using the Guardians rules set several NPC's have been generated for the GM to use in his/her sandbox campaign world with some modification or as is.

This NPC, GhostBlood, is a useful character that could be used as an antagonist or as an ally or even as a pre-generated hero character for players to start with immediately.

Some notes about the art. I've been studying comics from the mid 70's with some great diligence. This was a time that some truly legendary comics artists were working such as Steve Ditko, John Buscema, and of course Jack Kirby. I've chosen to do some traditional inkwork to emulate the era, and for this post using some halftone filters to simulate the printing from that era. 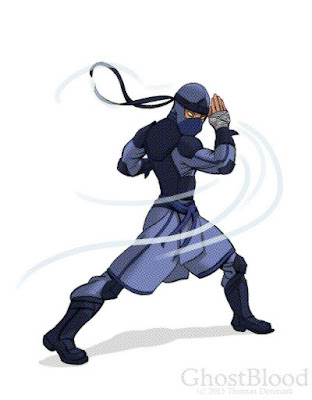 Ghost Blood is a member of the Wraith Brotherhood, an order of magical assassin/martial artists who walk the path between life and death. He can walk through walls, track like a bloodhound and conjure a psychic sword or fire darts made of his own blood!

Alarums & Excursions is a fanzine that started in the mid-70's. Each issue is compiled from articles by a number of individual contributors by Lee Gold who has been running the operation up to this day. It primarily focusses on D&D, but it also has comments, features, notes, and expository on game sessions.

Looking back on it from the perspective of 2015 it is like reading a combination Blog + Forum in slow motion. Where the posts and responses are once a month, rather than instantly. It is a truly fascinating piece of gaming history that gives insight on how RPG's were played in the 70's and early 80's.

I've put a couple of issues up on eBay for sale, these are from 1982. I've read them to death (and kept them in good condition!) and think its time for them to go to a new home. Hopefully you'll get as much enjoyment out of them as I have. Check them out! 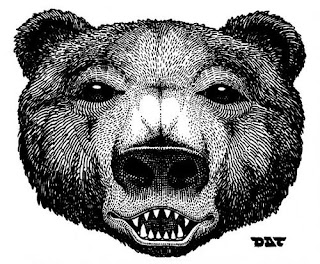 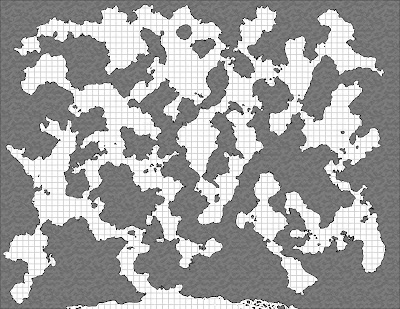 I haven't posted a mystery map in quite a while. Here I was experimenting with a way to do cool looking caves that would also be useful as a monster's lair, or long forgotten ancient subterranean realm.

When I started this map I was thinking of the D1-3 series, in particular how it had the vast unexplored but mostly empty map of the underworld where the DM was expected to fill in with his or her own maps. It really sparked the imagination of what could be down there.

I was thinking this is large enough to house under-dwelling creatures like a stronghold of kobolds or troglodytes, but not so large it couldn't be explored in 2-3 game sessions.
Newer Posts Older Posts Home
Subscribe to: Posts (Atom)