To RPG's what boardgamegeek.com is to boardgames

Best and Worst of TSR

I disagree with some of the choices, but Teague Bohlen posted an interesting best/worst list on his rather enjoyable Topless Robot blog.

Inevitably Indiana Jones is on the worst of list. My high school gaming group and I must be the only people who enjoyed this game. When we got the Judges Pack accessory and were able to roll up our own characters we had a blast. The system was light, fast, and captured the movies effectively enough. The modules were particularly well done.

I'd never put Boot Hill on any best of list. 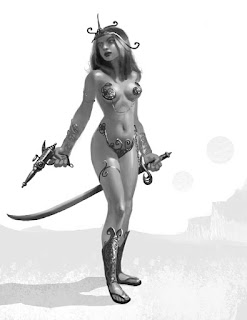 How do you draw the most beautiful woman on two planets? This is my feeble attempt using my regular technique of combining reference from several sources. Most notably Olga Kurylenko, but also some other models and a dose of my imagination. I'll probably do several more studies before I settle on a version I'm happy with, then I'll do the full color treatment on her.

Dejah Thoris, Princess of Helium, Daughter of Mors Kajek, Jed of Lesser Helium, and granddaughter of Tardos Mors, Jeddak of all Helium. "I am the daughter of ten thousand jeddaks...I trace my ancestry straight back without a break to the builder of the first great waterway."
Captured by the Tharks, she was rescued by John Carter, only to fall into the hands of Sab Than, Prince of Zodanga. She was again rescued by Carter, this time with the help of the Tharks, and, shortly after, became the wife of the Virginian. When Carter disappeared (his involuntary return to Earth), she waited and searched in vain, eventually setting out on a pilgrimage to the Valley Dor at about the same time Carter found himself back on the Red Planet. After a long series of adventures ranging from the south pole to the equator to the north pole, the two were reunited and returned to Helium. All this is covered in the first three books.
In the next four books, Dejah Thoris plays very minor roles, but in Swords of Mars she is kidnapped and taken to Thuria, the nearer moon of Barsoom, by a Zodangan scientist and an assassin, only to be rescued again by her husband. Later, she is seriously injured in an air crash and Carter has to enlist the services of Ras Thava, the Master Mind of Mars, to restore her to her former self. Some years later, both the Warlord and his princess are captured and taken to Jupiter, where the Morgors of that world attempt to secure information toward the conquest of Barsoom. Unfortunately, our chronicles end at this stage and, until further communications are received from Barsoom, we are unable to state just how Dejah Thoris, Princess of Mars, was returned to her beloved Helium. (-from A Guide to Barsoom by John Flint Roy) 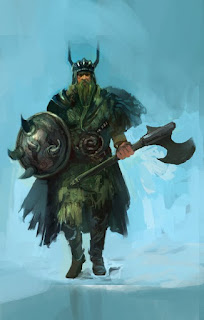 The first RPG I was exposed to that used a skill system was GURPS. We played quite a bit of it while I was in the military. Because of the circumstance of being stationed at a base with a bunch of other guys and a LOT of free time a lot of gaming gets done. This was during the long dark period of 2nd edition - which had caused me to virtually abandon D&D.

On the surface a generic RPG that does everything sounds like a great idea. Well, so does a spork, which is neither a good spoon or a good fork. I thought at the time that a skill based RPG was superior to a class based RPG, it modeled real life better after all, right? And it allowed more specific customization of your character so it must be better. The skill system in GURPS turns out to be quite granular, and it has a complicated web of if your proficient at this then you'll be kinda proficient at that.

If I have skills in battle axing then I should also be able to use a mace or swing a sword to some degree, right? So I have battle axe level 3, and mace and sword around level 2.

On a d20 this means using a mace my skill based character misses 1 in 20 times more often. This is a negligable 5% difference that in practical gameplay has little meaning for considerably more complication.

The only benefit I see is for those who like the post and pre game noodling of their character. Fiddling with all the possible choices. But, if like me, the fun for you is in the actual playing of the game a class based system is arguably superior in addition to being less complicated.

I can see the fun in endless customization choices for your character. I enjoyed 3rd edition's various prestige classes and feats quite a bit, until after the 30th supplement when the combination of choices became astronomical, and stat blocks practically became one-pagers (the OSR crowd can describe an entire dungeon in that space!). And to some degree the balance of class and skill was ok, though the skills were unnecessarily numerous. Bluff, climb, listen, move silently, search and spot covered 90% of skill use (YMMV).

I've come full circle on the issue. With my first RPG experience playing D&D, then migrating to GURPS, Call of Cthulhu, Gamma World, Star Frontiers, Champions, Deadlands, L5R, several "indy" games, and so on. I can say D&D was the most fun to be had in general. (the one exception is a Pendragon game I played once that was probably the best gaming session ever experienced)

Skills are not superior to classes. Where the rubber meets the road: actual gameplay. Classes do the job admirably well.
Newer Posts Older Posts Home
Subscribe to: Posts (Atom)